Biology by Miller & Levine, the 10th grade California biology textbook, defines evolution as, “The process of change over time,” and says that, “Darwin developed a scientific theory of biological evolution that explains how modern organisms evolved over long periods of time through descent from common ancestors.”1

The transformation of a common ancestor into all modern organisms over millions of years certainly counts as “change over time.” However, the evidence that this book and others like it cite for such large changes is limited to only minor variations, for example, in finch beaks, snail shells, and in the creatures of the Galapagos Islands.2 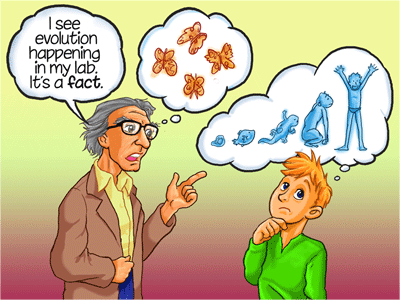 Darwin and everyone who followed after him, including the writers of this textbook, are making the assumption that if small changes can occur in a short period of time, that these same processes could also produce large changes over long periods of time.

However, there is no observable evidence that the kinds of huge changes required by molecules-to-man evolution (chemicals to life, animals with cartilage to bony animals, invertebrates to vertebrates, etc) ever happened or that they are even possible.

Every experiment that has ever been done has confirmed that there are certain limits to the amount of change that can happen in living creatures. In fact, the sciences of agriculture and farming rely on the fact that like only reproduces like, with minor variations in size, shape, color, and so on. Not only does this refute the possibility of evolution, but it strongly supports what Genesis teaches, that plants and animals were created “after their kinds.”