Charles Darwin, the father of modern evolutionary theory, believed that the ‘seeds’ for his ‘tree of life’, the first living cells, originated by themselves in “a warm little pond.” Though the idea that life can come from non-life, or spontaneous generation, was discredited years earlier by Darwin’s contemporary, Louis Pasteur, many scientists were quick to accept this naturalistic (nature-only) explanation for life’s beginnings.

The 10th grade California textbook, Biology by Miller & Levine, follows this evolutionary tradition. In a discussion on the early earth, it asks the question, “Could organic molecules assemble under conditions on early Earth?”1 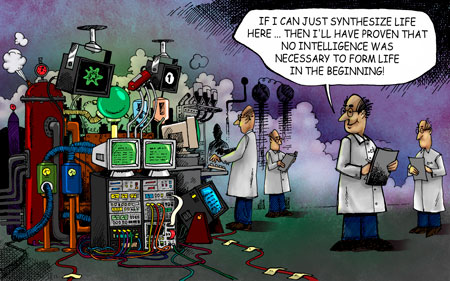 It then attempts to answer this question, first by examining the famous Miller-Urey Experiment, which produced amino acids (the building blocks of proteins) by ‘zapping’ a chemical mixture with an electric charge under conditions simulating the supposed atmosphere of the ‘early earth’. However, as the textbook later (correctly) points out, Miller and Urey’s ideas about the early earth are now believed to be incorrect, but is quick to add that, “new experiments based on current ideas of the early atmosphere have also produced organic compounds.”1

As the textbook explains further, however, “A stew of organic molecules is a long way from a living cell, and the leap from non life to life is the greatest gap in scientific hypotheses of life’s early history.”1 Indeed, living cells are extremely complicated structures, like nano-scopic cities, with their own transportation systems, computers, and factories. All of this complexity is coded for by the information on the DNA molecule, which is itself copied and transcribed by the complex machinery in the cell.

This presents several unsolvable problems for the evolutionary view of the origin of life, which are summarized in Biology, “…Another unanswered question is the origin of RNA and DNA. Remember that cells are controlled by information stored in DNA, which is transcribed into RNA and then translated into proteins. How could this complex biochemical machinery have evolved? Scientists haven’t solved this puzzle, but molecular biologists have generated intriguing hypotheses.”2 [Emphasis added]

The first problem is that the cell’s complex machinery and the DNA are interdependent. The DNA needs the machinery to be useful, yet the cells’ machinery is itself coded by the DNA. This is a classic ‘chicken-and-egg’ dilemma; in order for life to evolve, both the DNA and cellular machinery would be needed at the same time, an impossible scenario for any naturalistic, chance-based ‘origin of life’ hypothesis.3

The second problem is that information cannot come about by natural processes. It requires an language system, which can only come from an intelligence. As Dr. Werner Gitt, a creationist information scientist, wrote, “There is no known law of nature, no known process, and no known sequence of events which can cause information to originate by itself in matter.”4

Without a source of information, the evolutionary origin of life is ‘dead in the water’, and the only viable explanation left is that life came from a Life-Giver: the Creator Jesus Christ, “the Way, the Truth, and the the Life.”

Mike Riddle – The Origin of Life

Can Natural Processes Explain the Origin of Life?